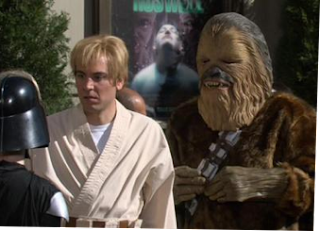 The funniest show on TV right now has got to be "How I Met Your Mother." It is right in my wheelhouse, with well-developed gen-Y characters, brilliant scripts, and talented actors. It's also, like "Seinfeld" for those one-generation older, regularly on topic with something I can relate to: the Super Bowl, the best burger in town, blind dates, and Star Wars. It is constantly referencing Star Wars. And my favorite episode that does so has to be one where Ted's new girlfriend finally admits that Star Wars is stupid:

"It's so stupid," Stella told Marshall. "I mean, first of all, how do they understand that walking bear they hang out with all the time?"

Now don't me wrong, I geek out as much as anyone when the opening crawl rolls, but she has a point. How does Han Solo possibly understand what Chewbacca is saying? It's like me understanding the moans, grunts, growls and barks of my dog. Even the nerdiest dweebs must admit this major flaw in the story. Though I am prepared for the rebuttal.
Posted by Unknown at 8:30 PM No comments:

Labels: How I Met Your Mother, movies, Star Wars, TV 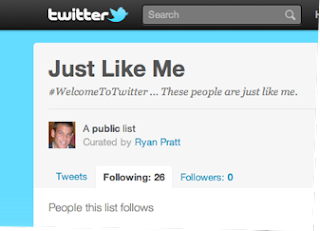 I just stumbled upon a nifty little Twitter trick for all those marketers out there running multiple Twitter accounts in the same field or industry. You can now create a list of similar Twitter accounts and include #welcometotwitter in the description, and then when someone follows you they will also be recommended to follow the other accounts in your #welcometotwitter list. This is particularly helpful to help you grow a fledgling account if you have a similar account that is more mature and popular.
Posted by Unknown at 10:04 PM No comments: 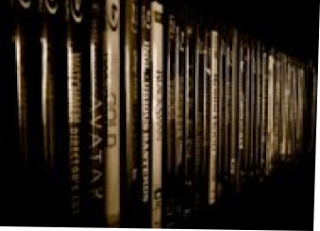 So why haven't you seen this films?

If you're a millennial you were likely alive when these movies were in theaters. And you've also had a chance to rent them on VHS, DVD, HD DVD and Blu-ray. So you are out of excuses.

If you are 30-years-old go rent or buy these films today! You won't be dissappointed. If you're a millenial but not 30 yet, you have between 1 and 19 years to finish this watch-by-thirty bucket list:

As I marketer, I found myself watching "Minority Report" the other day wishing marketing was capable of the advertisements Steven Spielberg, Philip Dick, and Scott Frank dreamed up in their futuristic world. Imagine what we could do with the hyper-personalized messages to passers-by in the airport or at the mall. ROIs would multiply ten-fold. And all the guessing that comes with audience, location, and interest would disappear. There is hope. The at-the-time unimaginable motion-controlled technology in the film is now widely available for a few hundred dollars with Microsoft's Kinect. I just hope I am lucky enough to be the marketer and not the marketee when it happens.
Posted by Unknown at 9:05 AM No comments: 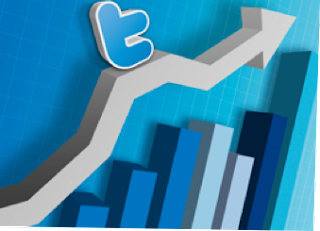 Twenty years ago the only way to tell how famous you were was if you were recognized on the street. Ten years ago you would estimate it by the number of Google search results for your name. Three years ago your popularity could be directly correlated to the number of friends you had on Facebook. Now there is a true test. Twitter, and your number of followers, is now the ultimate ruler to measure fame. And like anything, there are ways to cheat the system, but the"hanging chad" here can be removed with a simple formula: Followers / Following = Fame.

If you flunked algebra, try these:

Posted by Unknown at 8:46 PM No comments:

Spare Parts is The Island 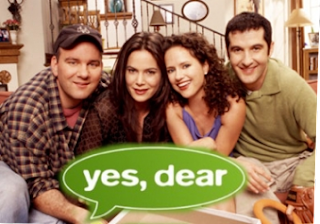 Ever since college I have spent my weekday-daytime-TV-watching hours on one channel, TBS. It airs all my favorite shows from my younger years: Home Improvement, Saved by the Bell, Seinfeld, King of Queens, Friends, Everybody Loves Raymond, and Yes, Dear. The other day I saw an episode of the latter that I had never seen before (a rarity). It was an episode of "Yes, Dear" where Jimmy pitches his movie idea to Greg's boss Mr. Savitsky. Greg was reluctant to help his friend, assuming it would be terrible, but he was wrong. It was a fantastic plot with well-developed characters, a little romance, just enough action, and the perfect twist. But Mr. Savitsky passes on his futuristic sci-fi romantic action-adventure called "Spare Parts." Hollywood did not. Two years later, Michael Bay basically made his movie where clones are harvested for organ transplants and the male character falls in love with a clone. He called it "The Island."
Posted by Unknown at 7:41 PM No comments: 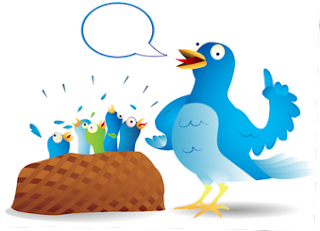 Some people seem to think Facebook walls and Twitter mentions are a new way to have a conversation with friends and family. But social networks are not a communication tool to replace text messaging, emails and phone calls. And it certainly isn't an instant messenger. So please stop publicly replying! If you want to say "hi" to your friend, text them. If you think the world cares about your drunken memories from last night or needs to know your plans for the party tonight, they don't. And please stop the social network Happy Birthday wishes! If you don't have their phone number to text or call them, they probably won't care if you forgot their birthday.
Posted by Unknown at 7:35 PM No comments: 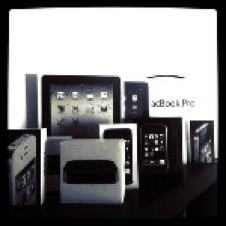 You might be a fanboy if...
Not that there's anything wrong with that.
Posted by Unknown at 7:34 PM No comments: 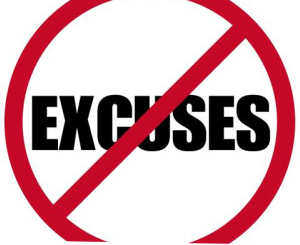 The typical argument by those few people who still haven't joined Facebook or Twitter is just that: "I don't care what Joe ate for dinner and when Jessica went to bed." And they're right! But that also just proves they're nay-sayers. Because just as there are some socially inept people on the web, as there are in real life, most people now understand that social networks are not a daily diary of your doings. We can blame Twitter for that - always asking "what are you doing?" when it should ask "what are you thinking?". But even better than that would be "what are you thinking that the world should know?". The world does not want to know that you ate a ham sandwich for lunch. And they certainly don't need to see a picture of it. But they might want to know that you had the best black forest ham and swiss on this side of the Rhine at cheap local deli named Brother's Grimm just off Main Street downtown. That is what social networking is for. That is it's purpose. And that is the reason those nay-sayers should join.
Posted by Unknown at 7:33 PM No comments:

So Google+ is the next big thing in social networking. But then again, so was Google Wave, and Google Latitude, and Google Buzz. So will Google+ actually catch on? The numbers unequivocally scream YES! It only took 1 month to become the fastest social network to reach 25 million users (it took Facebook about three years to attract 25 million visitors, while Twitter took just over 30 months). So jump on the bandwagon and grab your seat, but you can probably get off at the first stop and head home to Facebook or Twitter for a few months until you'll need another ride. Because right now, it's basically marketers and men that are the power users, and until your actual friends and family arrive, it's just a place to get spammed.
Posted by Unknown at 7:32 PM No comments: 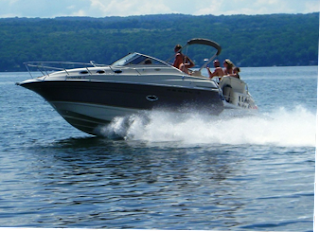 So I promised my girlfriend (Ally Leigh Taulbee) when I buy a boat I would name it after her. Since then, I have kept a list of clever possibilities. Here is that list:

Posted by Unknown at 7:32 PM No comments: 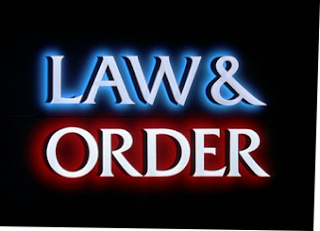 I was recently tasked to perform a social network investigation to "find anything damaging on a few litigants in the world of cyberspace." It was an interesting opportunity that I found myself whole-heartedly interested in. But with my limited legal knowledge (watching "Law & Order: SVU") I quickly realized that I could really only advise my client on the social media aspect of the investigation.

After some initial research, combined with my previous experience on the web and social networks, I believe it would be extremely difficult to find anything of legal significance on any of these "subjects" online. Here's why:

There are currently over 750 million registered users on Facebook. And more than 200 million on Twitter. And on each of those there are multiple people with the same user-defined name. Even if you know the current location of each person of interest, it still only narrows the field to a user-defined list of people in or around the area. There are some lat/long GPS check-in social networks, but they are far less popular. Foursquare has 10 million registered users.

Then if you actually find the correct person, it would be very rare that you find anything of substance to use in a legal case of this matter (i.e. someone tweeting: "I am stealing a bunch of money from my doctor LOL"). Occasionally, with some criminal lawsuits (i.e. the recent riots and looting in London) people are dumb enough to post something that could be used as evidence in a court of law (i.e. looters in London posting pictures of what they stole). But in these cases the best you might do is find a person to be greedy (i.e. "just bought a new Porsche I can't afford"), with poor ethical standards ("bitches ain't shit but hoes and tricks"), or maybe, if you are lucky, admitting to use of drugs ("I am so stoned right now"). Only a complete moron would tweet, post, or check-in to a place and state that they are doing something illegal - but then again there were those London looters?
Posted by Unknown at 9:56 PM No comments: